Go dimension-hopping with Ratchet and Clank in Rift Apart, as they take on an evil emperor from another reality. Jump between action-packed worlds, and beyond at mind-blowing speeds – complete with dazzling visuals and an insane arsenal – as the intergalactic adventurer’s blast onto the PS5 console. The ps5 game is awesome!

The gameplay of Rift Apart allows the player to play both as Ratchet and Rivet. It retains elements of previous Ratchet & Clank games, involving gunplay, collection of bolts, upgradable weapons, and gadgets. Scripted segments also involve Ratchet rushing through new planets. Though most of Ratchet’s move set is identical to that of the previous Ratchet & Clank (2016 ps5 game), he has a new move in which he can dash while strafing, allowing him to rapidly move to the side or backwards. He does this with a new glove gadget called the Rift Tether. This also allows Ratchet to rapidly travel forwards in space by using pre-existing yellow rifts, which enlarge when the reticule is focused on them.

Ratchet and Clank: Rift Apart features both entirely new planets, as well as alternate dimensions of planets from previous games. Between planets there will be seamless transitions, with no load screens. 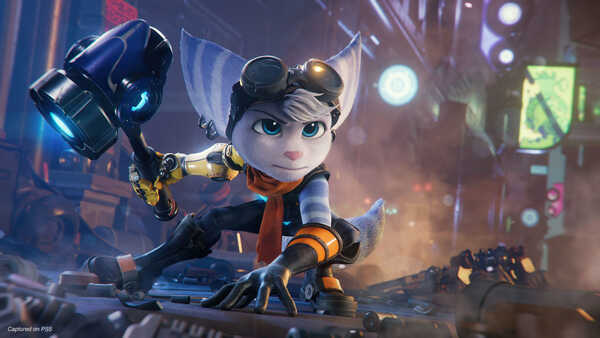 Ratchet has four new weapons: the Burst Pistol, the Shatter bomb, The Enforcer‎, and the Topiary Sprinkler. The Shatter bomb is an explosive weapon like the Fusion Grenade. The Enforcer is a double-barrel shotgun resembling the Shock Cannon, which uses the Dual Sense controller’s adaptive triggers to give tension; if the player holds their finger down half-way they can fire one trigger, or two if they pull it all the way. The Topiary Sprinkler resembles the Miniturret Glove, but instead shoots bolts of ice and sprouts plants around itself.

The story begins when Dr. Nefarious steals the Dimensionator and tries to use it to find a dimension where he always wins. He subsequently accidentally damages the fabric of space and time. After traveling through several dimensional rifts, Clank eventually arrives in a dimension where he meets Rivet, who refers to know Dr. Nefarious as “Emperor Nefarious”. Rivet and Clank must then reunite with Ratchet and figure out Nefarious’ troops

Be the first to review “Ratchet and; Clank: Rift Apart PS5” Cancel reply