The next generation of survival horror rises in the form of Resident Evil Village, the eighth major entry in the Resident Evil series. With ultra-realistic graphics powered by the RE Engine, fight for survival as danger lurks around every corner. Set a few years after the horrifying events in the critically acclaimed Resident Evil 7 biohazard, the all-new storyline begins with Ethan Winters and his wife Mia living peacefully in a new location, free from their past nightmares.
Just as they are building their new life together, tragedy befalls them once again. When BSAA captain Chris Redfield attacks their home, but Ethan must once again head into hell to get his kidnapped daughter back. As a result Ethan has to be in the field again. 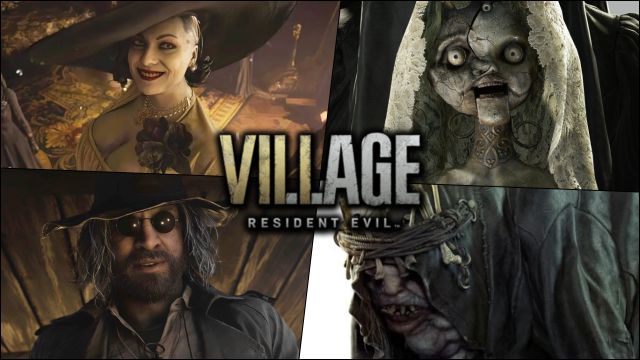 The protagonist of Resident Evil 7 biohazard, Ethan’s story continues in Resident Evil village. After being swept into the events of the Baker estate incident, thus regular nobody somehow managed to escape that nightmare alive. Ever since, he has lived a quiet existence with his wife Mia under the protection of the BSAA. But tragedy locks around.

A mainstay of the series since the first Resident Evil, this former S.T.A.R.S member has fought his way through numerous bioterror incidents. He currently works as a specialist for BSAA, a counter-bioterror NGO

Ethan’s wife. The organization she was once a member of were the developers of the bioweapon that caused the incident in the Baker home.

Ethan and Mia’s daughter, who Chris kidnaps!. She  is in danger in the village and need saving. So, it is expedient for ethan and his wife to put themselves in danger again.

A strange man from the village. He has a large selection of wares in his shop.

The ruler of the village, with the four lords serving under her. The villagers have devout faith in her, but her true face, hidden behind a mask, is just one of many mysteries surrounding the woman.

The mistress of the castle that overlooks the village. A towering woman with bewitching looks.

A bizarre man who hides away in a reservoir, and one of the four lords who serve Miranda. He hides his twisted form from prying eyes with a robe.

A puppeteer who lives in a fog-filled valley, and no one of he four lords who serve Miranda. She shrouds herself in mourning garbs and is always accompanied by her doll Angle.

A genius engineer who holes up in the factory just outside of the village, and no one of the four lords who serve Miranda. With his brazen attitude and giant hammer, he’s very intimidating.

LOCATIONS
Resident Evil Village is set in a “village” resting in the shadow of an ancient castle.
The Village: Delve deeper into the village in which Ethan finds himself. Take a closer look at a map with the four crests, the settlements the villagers reside in, and many other locations outside of the castle.
The Settlement: A settlement is Eastern Europe, isolated from the rest of the world.
The Castle: Where the mistress of the castle, Dimitrescu, and her daughters reside. The villagers live in fear of what’s inside. 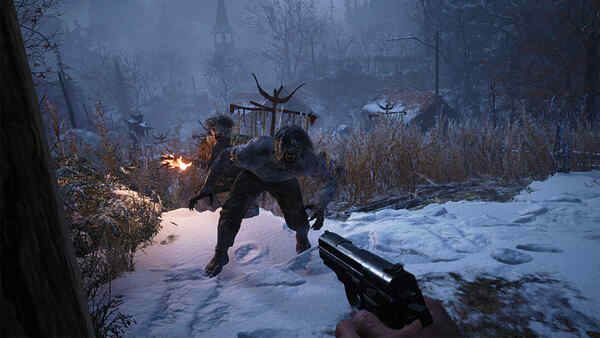 Combat
You must utilize numerous weapons and items against aggressive adversaries and add tools to your artillery for situations outside of battle. For instance, the knife can be used when they are close to quickly nail the evil enemy.
The Onslaught: Resident Evil games have always been about escaping extreme situations. Take down aggressive foes with your own hands.
Weapons: You can allot weapons to quick slots so you can instantly change weapons depending on the situation.
Defense: Guard against attacks to reduce enemy damage, then kick the enemies back.

RESOURCE MANAGEMENT
Keeping track of your healing items and ammo is incredibly important for survival horror. Stay well-stocked for the battles ahead.
The Merchant: Purchase weapons and items from the Duke. He can even improve your weapons for you for a price.
Inventory Management: What weapons and items should you keep on you? Managing your inventory could be the difference between life and death.
Crafting: Combine herbs and chemical fluid to create first aid med. You can even obtain more recipes to craft a variety of ammo.

The Mercenaries
The Mercenaries is an action-packed additional game mode, which is playable after completing the main story. Fight waves of monsters from a first-person perspective.

The fantasy continues in other console,